Restaurants That Are a Bad Date Idea

Comment are off
The Canadian Advisors
a theme restaurant, chances of getting laid, family restaurants, have some gimmick

While they seem pretty overdone, it’s the truth that there are several kinds of restaurants that you can take a woman to go for a surprisingly good date. There are some restaurants out there, however, that you should avoid at all costs. These include certain kinds of restaurants that are unfortunately popular among the dating crowd, which can lead to very bad dates. Of course, there are exceptions to this (and most other) dating rule, but in general, it’s best for your chances of getting laid if you avoid:

At first glance, a theme restaurant seems like a great place to go. What’s better than dinner and an experience all in one? The answer is, a lot of things. You want to take a woman to a first date so you can talk and get to know each other. This isn’t the time to show her just how interested you are in how they ate in medieval times, and it’s certainly not the place to try and fumble around in the dark or on ice just because that’s the cool new concept these days. These things can be a lot of fun for subsequent dates, but they should definitely be avoided for the first one. 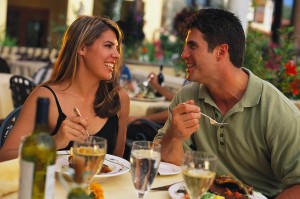 “Do not take her to an expensive family restaurant”

We’re pretty sure that the only reason some men take women to family restaurants is because they’ve had great times there before and want to replicate those. However, this is a terrible idea. For one thing, family restaurants are usually very, very noisy, meaning that you won’t be able to talk all that well with your date, which is the whole point of the first date. For another thing, the presence of a lot of children around totally kills the mood. For the third, final, and most important thing, family restaurants almost never have a bar, which we think is a much overlooked opportunity. If you’re going to go out somewhere that doesn’t have a bar, you’d better make sure your conversation is the most interesting and enchanting thing she’s heard in a very long time.

A scene restaurant is basically somewhere that a lot of “cool” 20-somethings go to try and impress their dates. There’s a lot of mood lighting, edgy music, and the servers will have some gimmick to use on the customers – like rudeness, usually. This isn’t the exact same thing as a theme restaurant… it’s worse. Taking a woman here is a way to say that you’re a pretentious douchebag who probably doesn’t deserve to be around a woman. If you’re with a woman and you’re talking about where to go, and she suggests one of these places, you probably don’t want to be going out with her in the first place. If you’re the one who suggests it as one of your favorite places, you’re very quickly going to lose your opportunity to get with this woman at all, let alone get with her on the very first date.